Artur de Sousa, better known as Pinga, was born on the Island of Madeira on 30 July, 1909. Beginning his career at Club Sport Marítimo, the adept forward and inside-left midfielder extraordinaire would play at Os Verde-Rubros for three seasons, before crossing the Atlantic divide to ply his trade of Northern powerhouse Futebol Clube do Porto for over 16 years.

Crossing the Atlantic to the North

Pinga first came to nationwide fame in the green and red of hometown club CS Marítimo (where he would eventually have a street named after him in Funchal) in 1930, where he earned his first call-up to the national team against Iberian rivals Spain.

Catching the eye of Portuguese footballing powerhouse Futebol Clube do Porto, Pinga landed on the mainland on the 23rd of December, 1930, debuting two days later amidst a flurry of surreptitiousness over his signing. The press raised various doubts as to the transfer’s legality, with ‘Stadium’ magazine pointing at suspected irregularities in signatures, finishing with a curious statement: “The AF Porto is rich in mysteries…”

Pinga would become the cornerstone upon which a side of revolutionary proportions was built upon; embodying the notion of altruism, garnering the admiration of all those around him. This was demarcated in Porto’s run to the Campeonato de Portugal in 1931/32 (currently known as the Taça de Portugal); where the Blue and Whites (pictured below) recorded a 3-0 win over eternal rival Benfica that was inspired by none other than Pinga. 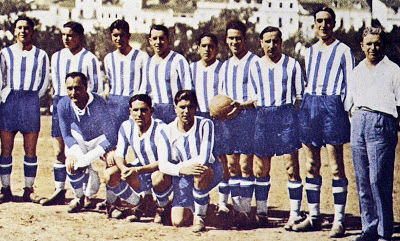 The chronicler of footballing magazine “Stadium” would go on to write: “(I am) glad to record, as an example and something to praise, the way Pinga plays. It is the man who never stops; always in defense or in attack, that dribbles, passes and intercepts… never committing violence. Pinga is the complete player; master of technique, he combines the most elegant way to play.”

All issues aside, the Madeiran would go on to play 241 recognised senior matches for club and country; scoring 153 goals in the process, with other resources put it at as high as 400 total games and 394 goals!

The Pearl of the Atlantic would garner the praise from all four corners of the Portuguese peninsula, with the much esteemed former Seleção player, footballing journalist and founder of Benfica’s footballing paper A Bola, Cândido de Oliveira (pictured below, center alongside Pinga, left) sharing his own sentiments: “(Pinga is) perhaps the greatest player of our talent in football, an extremely vivid player, truly brilliant.” 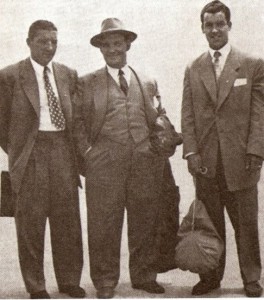 During his allegiance with the Dragons during the 1930s and 40s, Pinga would become the footballer with the greatest total of goals scored against the side seated in the Alvalade; Sporting Clube de Portugal.

Os Leões would concede twelve goals against the Madeiran-born wonder, with six of those efforts coming in just two matches. Pinga would mark his debut against Sporting with a hat-trick, played at the Estádio do Lima 80-years ago in the 1934/35 season, which ended in a 4-2 victory for FC Porto as they went on to become inaugural champions of Portugal. 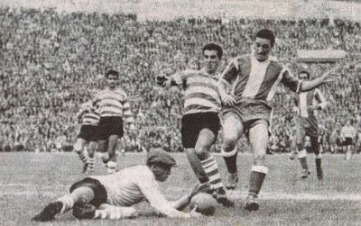 (Pictured Above) Pinga in action against Sporting Clube de Portugal

The Tripeiro would be at it again, this time the following season, scoring three of ten goals that allowed the Dragons to earn their biggest margin of victory over Sporting in their history, as the game finished 10-1.

Pinga would go on to top the goal scoring charts that campaign, although his side would have to settle for second spot as they fell a point behind champions Benfica.

Although the likes of Eusébio’s Benfica of the 1960s to early 70s, and Fernando Peyroteo’s Cinco Violinos of the late 1940s t0 1950s dominate Portuguese footballing folklore, FC Porto had its own contingent of mythical proportions, going back in further into the 1930s. 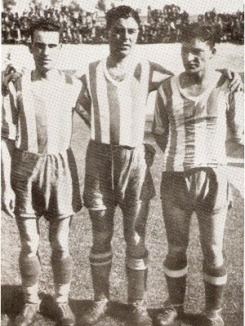 Os Três Diabos do Meio-dia. Or, in English, the Three Noon Devils.

The collective name dates back to 1933 as the brilliant trio of players were the driving force behind an FC Porto team that defeated some of Europe’s strongest teams in a series of matches that kicked off at midday. Pinga (pictured right) lined up on the left side of a midfield alongside Acácio Mesquita (pictured centre) and Valdemar Mota (pictured left).

The trio’s highest point would come in the 1934/35 season, as they led FC Porto to the national championship in its inaugural year.

The side, led by Joseph Szabo, finished the season with 43 goals for in a league consisting of only eight sides. An average of more than 3 goals a game largely contributed by Pinga and the complementary Noon Devils, with the former winning the Portuguese Golden Boot the following season with 21 goals.

The Three Noon Devils were the core of the first FC Porto side to truly make its mark on Portuguese football. On the eve of his farewell from the beautiful game, Pinga affirmed such sentiments: “The three of us was what playing football was all about. Excuse the vanity, but no three footballers can ever be arranged that will combine as perfectly as us, even if we didn’t know how it came to be.”

The End of an Era

The turn of the decade promised an even greater wealth of titles for Porto’s Three Noon Devils, although it was not meant to be. The 1940s marked one of the driest spells in the Northern Club’s history as sides from Portugal’s capital finally wrestled away Pinga and the Blue & Whites’ grasp on the silverware.

The 1940/41 season marked Pinga’s last hurrah and chance at the Portuguese title, as the Dragons finished second to SL Benfica by three points, having surpassed them in nearly every other category. The following season in 1941, Pinga and co. would be trounced by their eternal rivals Benfica 12-2 en route to an Eagles’ title win.

That shortfall would mark the dominance of Lisboa in Portuguese football, with the inception of Sporting’s Cinco Violinos led by Peyroteo, Belenenses’ As Três Torres de Belém, or the Three Towers of Bethlehem, which won their only Portuguese league title in 1945/46, and Benfica all overshadowing Pinga.

Farewell to a Legend

The times would continue to grow dire for Pinga, as he only made three appearances for Portugal National side. His time with the Seleção das Quinas ended on the 1 January 1942 after 11 years of service, having only missed one game in that time. Portugal’s greatest player in the post-war period would wave his final goodbye as the skipper, beating Switzerland 3-0.

Pinga hung up his boots as a result of a meniscal tear that sidelined him for a year before coming back at 36 years-of-age to only appear twice for Porto, netting a goal in the process during the 1945/46 campaign.

The clubs from the capital would share the podium until Pinga’s retirement in 1946, and would continue to dominate beyond that as FC Porto failed to win a league title until the 1955/56; sixteen years after the Madeiran left the game.

On 7 July 1946 at the Estádio do Lima, Pinga made his final farewell to a legion of support, leaving a club and city in tears and to wave white handkerchiefs, although it would not end the legend internals’ time in the north, serving as a youth coach until his death on 12 July 1963 at the age of 53.

A Portuguese international at 21-years, Pinga possessed the physiognomies of one of the greatest footballers of his generation. A sharp shooter on his ‘left peg,’ Pinga was an expert in the feint and gambit, with an astute first touch and control on the turn complemented by a tireless work ethic that granted equal effectiveness in attack and defense.

A prolific goalscorer aside, winning the Portuguese League’s Golden Boot, the Pearl of the Atlantic, as he was known, won three Portuguese League titles, and would go on to become the greatest name to come from the island of Madeira before Cristiano Ronaldo, as he etched his name in Portuguese footballing folklore among the likes of Eusébio, Coluna and Peyroteo.

It is unlikely that FC Porto and Portuguese football will ever see the passion, custodianship and love of a footballer that bled blue and white as Pinga; the Pearl of the Atlantic.

“The muscles weaken, but my heart will continue to fight for FC Porto and the city of Porto.” 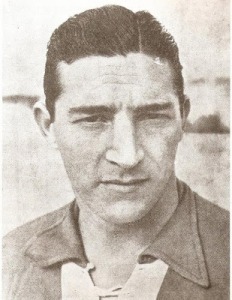